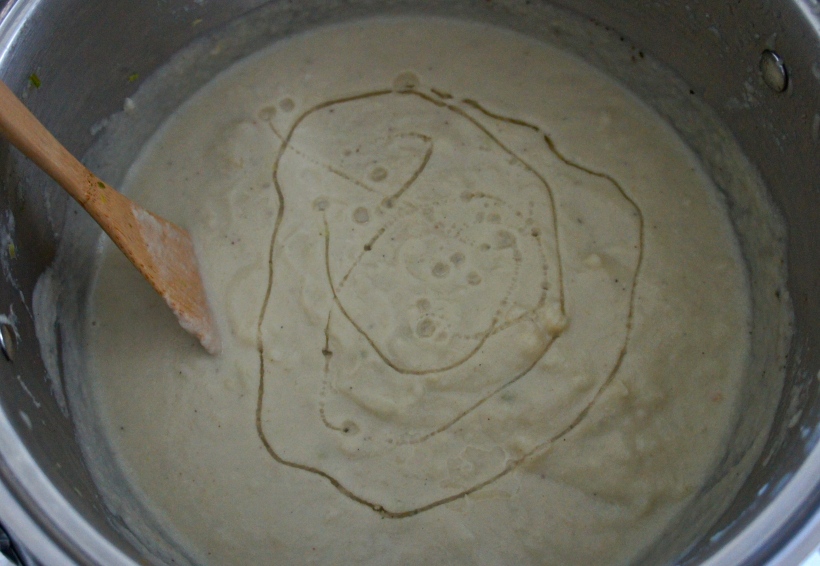 This is my first real colder weather-comfort meal that I’ve made this season.  Although I’m resisting the inevitable end of warm temps, deep-down I’m really excited for scarves, boots and the holidays!!

My clients sent me a cauliflower soup that they wanted me to make, but it wasn’t 100% paleo.  After doing a little research and a little brainstorming, I came up with a hybrid of both a paleo and non-paleo cauliflower soup that is unbelievably satisfying and full of flavor.  The addition of artichoke hearts as a thickening agent comes from Juli Bauer of PaleOMG’s cauliflower soup.  This is a technique she has used (and therefore, I have used) before, recently in the Artichoke Lemon Pesto Pasta with Chicken (Juli’s recipe here).  What really sets this soup apart though, in terms of flavor, is that the cauliflower is roasted in the oven as opposed to just being steamed.  If you made my Savory Oven-Roasted Cauliflower, you know how much a difference is made by roasting with some oil.  I swear I’m not obsessed with cauliflower, it’s just SO versatile and a staple in paleo cooking.

* It might seem like a flavor overload with the addition of bacon AND truffle oil, but I’m really into flavors.  If that is too much for you, then choose one or the other… But to be honest, this soup doesn’t absolutely NEED either of these flavor bombs – it’s really tasty on it’s own!

3 cloves of garlic, minced or pressed

32 ounces of chicken broth (or more, depending on desired consistency)

Cut your cauliflower into florets, place in a large bowl and toss with the olive oil and a few shakes of salt.  Transfer in a single layer onto cookie sheet lined with foil and roast for 30 minutes or so, until it is easily pierced with a fork and has some color (stir up the cauli halfway thru cooking).

While your cauliflower is roasting, melt the butter in a pot (make it a large one because the rest of the soup will be created in this).  Add your leeks and saute until soft. 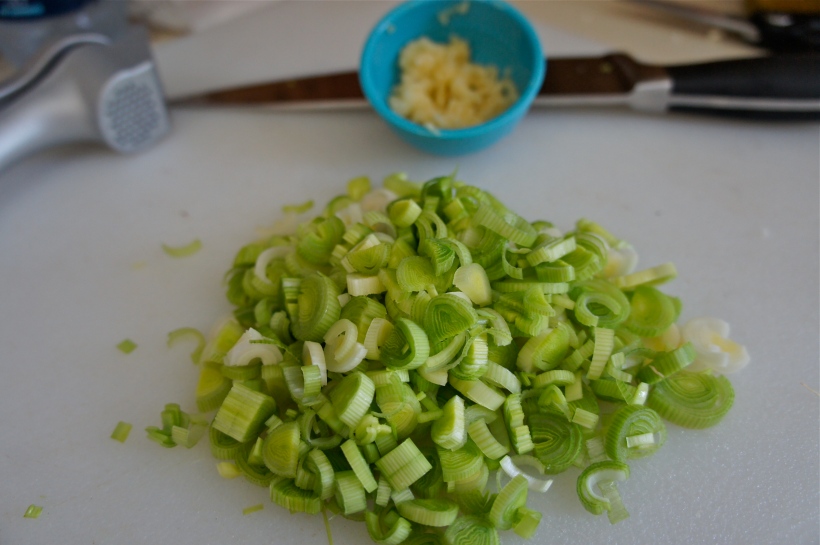 Add the garlic, and once it’s fragrant, add the roasted cauliflower, and chicken broth.  I started with 32 ounces of broth and adjusted later.  Let this mixture simmer for 10-15 minutes.  Then remove about 1/3 of the cauliflower and put it in a separate bowl.

Using an immersion blender, blend your soup until it is mostly smooth but not completely pureed.  At this point, add your artichoke hearts a little at a time until you are happy with the consistency.  I really like the taste of artichoke hearts, so I added them all, and then added more chicken broth to thin it out a little.  Experiment with taste and consistency by adding artichoke and broth until the soup is at your ideal thickness and taste.  Now is also when you can add salt and pepper to taste.  Once you’re happy with it, put back the cauliflower that you had set aside.

This is my favorite part! — once it’s ladled into bowls, add in a drizzle of the truffle oil and/or some pieces of the bacon to finish it off.