This is my first real colder weather-comfort meal that I’ve made this season.  Although I’m resisting the inevitable end of warm temps, deep-down I’m really excited for scarves, boots and the holidays!!

My clients sent me a cauliflower soup that they wanted me to make, but it wasn’t 100% paleo.  After doing a little research and a little brainstorming, I came up with a hybrid of both a paleo and non-paleo cauliflower soup that is unbelievably satisfying and full of flavor.  The addition of artichoke hearts as a thickening agent comes from Juli Bauer of PaleOMG’s cauliflower soup.  This is a technique she has used (and therefore, I have used) before, recently in the Artichoke Lemon Pesto Pasta with Chicken (Juli’s recipe here).  What really sets this soup apart though, in terms of flavor, is that the cauliflower is roasted in the oven as opposed to just being steamed.  If you made my Savory Oven-Roasted Cauliflower, you know how much a difference is made by roasting with some oil.  I swear I’m not obsessed with cauliflower, it’s just SO versatile and a staple in paleo cooking.

* It might seem like a flavor overload with the addition of bacon AND truffle oil, but I’m really into flavors.  If that is too much for you, then choose one or the other… But to be honest, this soup doesn’t absolutely NEED either of these flavor bombs – it’s really tasty on it’s own!

3 cloves of garlic, minced or pressed

32 ounces of chicken broth (or more, depending on desired consistency)

Cut your cauliflower into florets, place in a large bowl and toss with the olive oil and a few shakes of salt.  Transfer in a single layer onto cookie sheet lined with foil and roast for 30 minutes or so, until it is easily pierced with a fork and has some color (stir up the cauli halfway thru cooking). 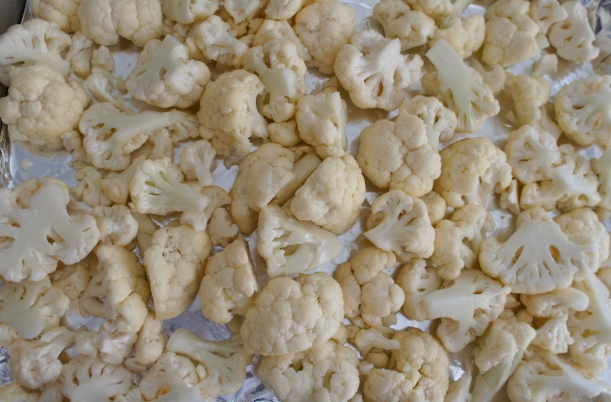 While your cauliflower is roasting, melt the butter in a pot (make it a large one because the rest of the soup will be created in this).  Add your leeks and saute until soft.

Add the garlic, and once it’s fragrant, add the roasted cauliflower, and chicken broth.  I started with 32 ounces of broth and adjusted later.  Let this mixture simmer for 10-15 minutes.  Then remove about 1/3 of the cauliflower and put it in a separate bowl.

Using an immersion blender, blend your soup until it is mostly smooth but not completely pureed.  At this point, add your artichoke hearts a little at a time until you are happy with the consistency.  I really like the taste of artichoke hearts, so I added them all, and then added more chicken broth to thin it out a little.  Experiment with taste and consistency by adding artichoke and broth until the soup is at your ideal thickness and taste.  Now is also when you can add salt and pepper to taste.  Once you’re happy with it, put back the cauliflower that you had set aside.

This is my favorite part! — once it’s ladled into bowls, add in a drizzle of the truffle oil and/or some pieces of the bacon to finish it off.

I have a tendency to SOMETIMES make a really big deal out of something small.  This usually only happens in situations where I’ve planned things out perfectly, and then something unforeseen or unfortunate happens to screw up said plan.  See, I’m a chronic over-planner.  There are times when this trait serves me well…. but my experimental adventures in the kitchen are not usually those times.

I spent all of Monday shopping, prepping, cooking and cleaning for my clients, and Tuesday I just had one last thing to make, then I was supposed to be off to deliver the goods.  The last item that I had to make Tuesday morning was this recipe for cauliflower on the grill. I had all my ingredients (which weren’t many) and attempted to get started on it around 9am.  It was then that I realized we were out of propane.  And I FREAKED out ….like really.  Like, crazy person style.  In hindsight I’m a bit embarrassed about my reaction, but this isn’t the first time a reaction like this has come about.  I was on the verge of tears and couldn’t see any easy fix.  The closest Home Depot was 25 minutes away and I didn’t have time for that.  I couldn’t make another recipe with the cauliflower because this grill recipe was the one that I PLANNED on!  I could have easily sped out the door to Home Depot and switched out the propane, and solved it that way (I wasn’t really on a STRICT timeline- my clients are super flexible and understanding).  I could have made a cauli-rice or a cauli-mash that would have been fine.  But in this heated moment neither of those options made sense to me, they both seemed ridiculous and inconvenient.

Afterwards, when I was thinking more clearly, I realized it’s not the exact issue at hand (in this case the lack of propane) it’s that I get so angry at the WHY of the issue, and more at myself for not seeing the issue coming and avoiding it.  I think it’s me being hard on myself than anything else.  Why didn’t I check the propane the night before?  Full on childish temper tantrum….  I’m 29 and have faced some real-deal issues in the past, so this is not acceptable.  Screaming loudly and on the verge of tears over CAULIFLOWER!  COME ON!!  The anger at myself clouds any easy solution in the heat of the moment and I’m completely irrational until I come to my senses.

Since you’re on the edge of your seats about the fate of the cauliflower, I’ll get to that now.  With the help of Google and the fact that I have such a developed kitchen pantry, I found an oven-roasted recipe for them and it turned out UNBELIEVABLE!  My favorite way that I’ve found yet to cook cauliflower!  And I would I never found or tried this recipe if I hadn’t been out of propane!  Funny how it works!

I don’t think that I have to write a paragraph about the lesson I learned in this situation because it’s pretty obvious and elementary.  I did write it down immediately as a blog post idea, so that I can talk about how ridiculous my reaction was in hopes that I won’t do it again.  I’m sort of embarrassed even sharing this with anyone, but it’s so that I can recognize it, hold myself accountable for such a reaction and avoid it in the future.  It had happened countless times before this “incident” and has happened a few times since (this happened last month).  Also, now I can share the recipe and pictures with you! 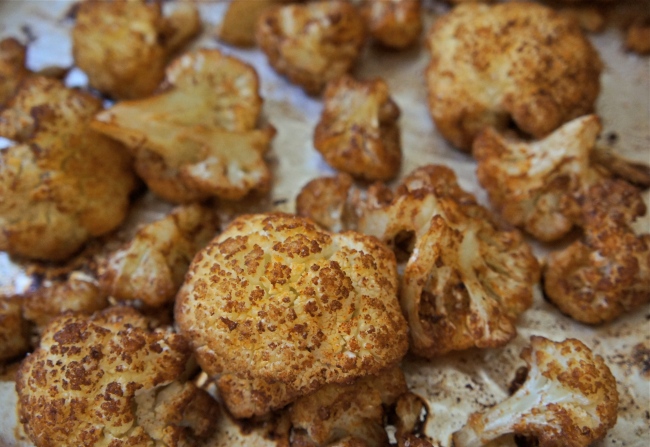 1 head of cauliflower, broken into florets

Preheat your oven to 400 degrees and line a baking sheet with foil.

First toss your cauliflower with just the melted fat – toss in a bowl for at least a couple of minutes so it covers the cauli well. Then, mix your cocoa powder and paprika in a little bowl and sprinkle it on the cauliflower- Toss until evenly coated and distributed.  Then sprinkle the garlic powder and salt on cauliflower – as much or as little as you’d like!  I was not shy with the garlic.  Then I added just a dash of cayenne for some very subtle heat.  Toss cauliflower one more time to coat evenly.

Spread this out on your baking sheet and pop in the oven until they get some color – 25-30 minutes, but stir them up halfway through to make them cook more evenly.

*NOTE* – the cocoa powder does not make the cauliflower taste at all chocolatey or dessert-like.  The cocoa powder gives it a really deep and complex flavor, similar to what it does for Mexican Mole.  Go ahead and splurge for a container of unsweetened cocoa powder!  I use it in other savory dishes and every Paleo Chocolate treat that I make! 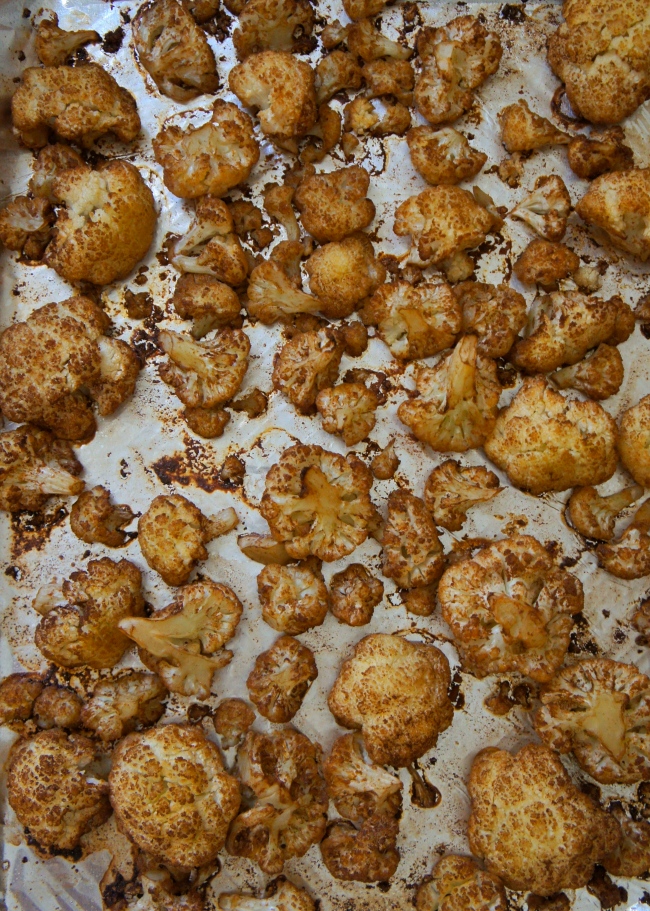